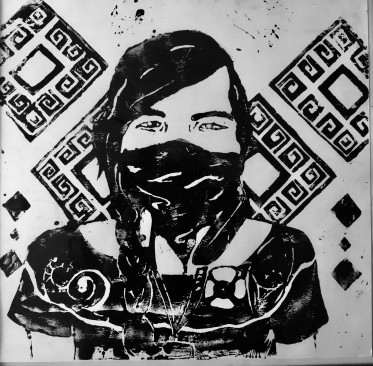 “I mostly teach Raza, I mostly teach Mexican youth,” says Jackie Rodriguez-Vega as she explores the effect of the current political climate on the Latino youth she teaches, which also include young people from Puerto Rico, Honduras, El Salvador and more. “They already know what’s going on. They know that people in positions of power are not for them. And what do you do with that? You know, you’re in a U.S. History class and you’re talking about the beauty of voting… I’m personally trying to build young people who are going to be critical about what’s going on all around them. Especially politically, because they are influenced by it, right? They live in this country – everything that they go through is through that. So, I want them to see perspectives, I want them to see all these different sides so that hopefully when they do get older they want to participate in that process. But it’s kind of hard when deportations are happening, or that fear … all those things that are real.”

Ms. Jackie Rodriguez-Vega, an educator of 10 years in Chicago Illinois, teaches in the same public school system she grew up in, and in the same conditions as her students — she says she has decided to stay and give back to her community by helping to improve her neighborhood.

Jackie is also the daughter of a single Mexican-American mother, who she says always influenced her to give back to her “people.” She credits her mother for the work she puts into impacting her students every day.

“I just think all the women in my family are pretty amazing. They really inspired me, because growing up there was no fathers around. It was kind of an interesting situation. You know of course, I had to go through my traumatic experiences as a young person, but I got out of it,” reflects Jackie as she delivers a passionate account of how she is able to take what could have potentially been an excuse to make poor decisions in her life, and turned her childhood experiences into an opportunity to build relationships with her students.

Listen in as she shares more about her emboldened passion for teaching the Latino youth in her neighborhood of Chicago, Illinois, or “Chi-town,” as she calls it — all while appreciating the need to provide hope for things like higher education, but also recognizing that every young person’s journey will be different, yet valuable nonetheless.

One thought on “Episode 18 – Jackie Rodriguez-Vega”

Chat with Teachers on iTunes